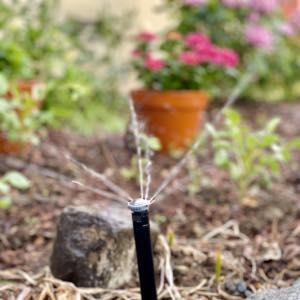 Written by admin on June 17, 2022. Posted in Irrigation, Sprinklers

All you need to know about underground sprinklers

So, you’ve planned out your new sprinkler system, and now you need to decide which sprinkler types to use when installing your underground sprinkler system. Choosing the proper sprinkler heads can save both time and water. This guide will provide you with an overview of the most common sprinkler types and features, and arm you with the knowledge required to properly irrigate.

A timer, valves, underground pipes, sprinkler heads, and risers that connect the pipes to the heads are the main components of an underground sprinkler system. In this guide, we’ll concentrate on sprinkler heads, but if you want to learn more about this type of system, including the benefits and details on the parts and steps to install one yourself, we have some great irrigation guides to help.

The proper sprinkler heads are required for an effective and efficient lawn irrigation system. Your system’s manufacturer may include a planning guide to help you choose the right heads for different areas of your lawn, but we’ll go over some of the most common types and nozzles, as well as where you might use them.

The internet has a great depth of sprinkler and irrigation resources, and can help you get the most out of your watering. Remember that, while using an underground system correctly can use less water than manual watering, you must still adhere to any watering restrictions or guidelines in your area.

Knowing the main parts of a typical pop-up sprinkler head will help you understand how they work and what to look for when designing your system.

The nozzle is responsible for dispersing the water. Certain models have different spray patterns and dispense water from different distances. Some have adjustable patterns or may allow you to make minor adjustments to the distance at which they cast the water. The sprinkler body may already have nozzles attached, but you can also buy them separately and install them yourself.

The riser is a vertical tube that raises the nozzle. Taller risers provide more distance for the water and keep it above obstructions. A riser can be stationary, as in shrub or flower bed sprinklers, or it can be part of a pop-up unit that extends above the ground when the system is activated. This type of riser, which typically ranges in height from 2 to 6 inches, is also known as a plunger. Riser also refers to the underground vertical pipe segment that connects the body to the water supply pipes.

The body is the housing (typically plastic) that is installed in the ground. It houses the spring as well as the riser and nozzle when the system is not in use. It also provides threaded ports for the riser and drains.

The cap protects the internal portion of the assembly from large debris by covering the body.

The wiper seal surrounds the riser or plunger and acts as a gasket between the riser and the body. When the sprinkler head is above ground, it prevents water from leaking from the sprinkler body and aids in keeping dirt and debris out of the body.

The inlet is located at the bottom or side of the body. It connects the sprinkler head to the supply pipe via the underground riser.

The pressure regulator, available on some models, this device helps maintain constant water pressure in a system so that it can operate efficiently.

A check valve, which is available on some models, prevents water in the pipes from seeping out of the housing and into low areas of your yard once the system is turned off.

In an underground sprinkler system, pop-up heads are the most common type of sprinkler. When not in use, the nozzle and riser retract beneath the ground’s surface to avoid damage from mowers, pets, foot traffic, and other factors. When the nozzle is activated, it rises and begins releasing water.

Sprinkler heads that are static or fixed are ideal for flower beds or shrub beds where there is less risk of damage. These shrub head sprinklers are typically higher in height, allowing water to reach over plants and other obstacles.

Underground sprinklers employ a variety of nozzles. These may be included on a fully assembled component, but they can also be purchased separately and installed yourself. Spray patterns or arcs on nozzles are commonly one of three:

Spray head nozzles work best in small to medium-sized yards. They dispense water in the form of a spray or mist and typically have a radius of 4 to 15 feet. The nozzle does not turn. It has a fixed radius or arc instead, which allows you to better control the irrigation area and avoid wasting water on patios, sidewalks, and driveways.

Spray head nozzles typically require around 30 pounds per square inch (PSI) of water pressure and irrigate at a rate of about 1-1/2 to 2 inches per hour. They have a relatively high irrigation rate, so they dispense more water more quickly, but they clog more easily than other types of nozzles.

Rotor nozzles direct one or more streams of water around an area by rotating in a full or partial circle. These are appropriate for medium to large lawns. They require 50 PSI water pressure and deliver water at a rate of 1/2 inch to 1 inch per hour. They apply water at a slower rate than spray nozzles, but the water has more time to soak into the ground because it is applied over a longer period of time. Because of this, rotor nozzles are a good choice for irrigating slopes and slow-draining soils like clay, where you risk runoff and waste if you apply water too quickly. Rotor heads are classified into two types:

Impact – Impact sprinklers can dispense water over a radius of 80 feet or more while emitting a distinctive ticking sound. A spring-loaded arm continuously interrupts the flow of water to redirect it for a brief moment, distributing the water more evenly. The mechanism on some models remains above ground even when not in use, but there are smaller pop-up versions.

Gear Drive – An internal mechanism rotates the head of a gear drive. They are typically pop-up models that run more quietly than impact heads. They can irrigate up to a 55-foot radius depending on the model. Gear drive sprinklers with a single stream have the longest reach, but some models have two streams to provide coverage near the head and at a distance. Others spray a mist from the head to irrigate the area with less force. This feature is useful when watering a newly seeded yard.

Just a quick brain dump for you on underground sprinklers. More to come.