Home » Gardening and Flower Farming Blog » When to Prune Lavender 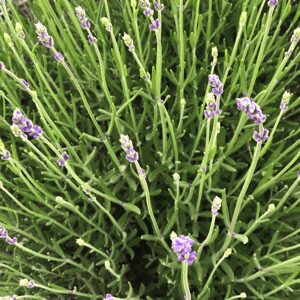 When to Prune Lavender

When to Cutback and Trim Lavender Plants

One of the most common questions we hear is “When do you prune or cut back lavender?” Here is a quick outline of what you need to know for pruning/cutting back lavender successfully. While lavender is a hardy, strong plant in the right growing conditions, it does need special attention when it comes to pruning, and cutting back properly is the key to a healthy lavender plant that will last many seasons. And just so you know, correctly pruning lavender plants will help yield more flowers and a healthier, stronger plant.

If you read any garden book, lavender is known as a semi-shrub. Understanding this concept forms the foundation for proper lavender pruning. A semi-shrub is a plant that grows like a perennial, producing green growth  year after year. The older parts of stems on a semi-shrub start turning woody after a few growing years. On any lavender variety, you’ll find that deep down inside the mound of grey-green leaves, stem bases are woody with almost a “barky” texture.

Those woody stems are are any area you don’t want to see. That wood is lacking strength, not strong like a tree’s trunk, and when winter brings snow or ice, or the plants are watered overhead, the woody stems are more likely crack and break. If you prune back to hard, the Lavender’s woody stems won’t produce new green growth.  As the stem shifts to wood, your plant loses its ability to produce new green lavender shoots, which are the ones that flower and produce those lovely blooms. While pruning lavender, if you cut into woody stems and back too far, they won’t grow again, but will simply die.

When you prune your lavender, you’re aiming to slow down the plant’s progress toward forming woody stems, and keep it at an early growth stage, young and vigorous. As a rule of thumb, you need to plan on pruning lavender at planting time and every year right after it blooms. When you are planting lavender, prune plants lightly, removing all growing tips and flowers. This encourages the plant to branch, and grow. Use this same lavender pruning technique every year as new growth starts to appear.

Pruning lavender after flowering is ideal, but if you miss the window, it is a forgiving plant. You can plan your lavender pruning when it works for you, as long as you complete it by early spring when the temperatures begin to rise. Lavender flowers on the new growth that appears each year, so if you prune before new growth really starts lengthening, you won’t interfere with blossom formation and the normal growth cycle.

Pruning lavender in spring is always sometimes necessary in colder regions to remove stems that suffer winter damage to stems. Pruning lavender at the end of the growing season, in late summer to fall, can help open the plant’s interior to allow good air circulation.  Also removes some of the branches, which can ultimately help prevent winter damage. Ideally, pruning lavender twice per year in spring and fall is optimal, if you can squeeze that into your gardening plan.

When you’re pruning lavender plants that are established and hardy, remove at least 1/3 of all growth when cutting back. With older plants, you can cut back three leaf pairs above the woody stem area. Don’t cut into the woody area, as mentioned because the buds on those stems won’t sprout.

Now get out there and prune your lavender!!