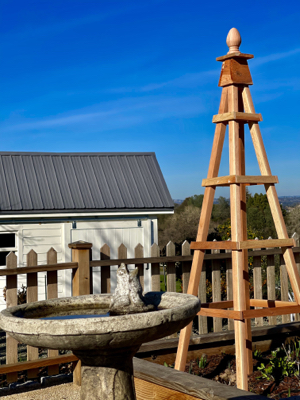 The Garden Obelisk Project Part I: What is an Obelisk?

Written by admin on February 13, 2021. Posted in Garden design, Obelisk

History of the Garden Tuteur or Obelisk

I’ve wanted to build a Garden Obelisk, or Garden Tuteur, for quite a while, and finally had come weekend time to make draw up some simple plans for the garden decoration, and get it done. Before I get to the project, here is some background.

What is an Obelisk?

An obelisk is a tall, 4-sided monument that originated in ancient Egypt. It rises from the ground and tapers to a pyramid, or pyramid type structure at the top (huh, imagine that, a pyramid 😉 ). It was a symbol of reverence built for the sun god Ra, and is meant to symbolize frozen rays from the Sun. Pretty cool, eh? You can read more on history here: Obelisk History

The obelisk has been around since the dawn of man, and its geometry is striking and eye catching, and with the sky as a background, it is a beautiful visual element in the home and garden.

How did the garden obelisk come about?

The fascination in Europe over the obelisk started with the Romans. As the empire expanded, they brought them back to Rome, and over time the love of the obelisk shape and design spread throughout Europe, and eventually France.

Paris is literally littered with obelisk forms, with the grand obelisk design being the Eiffel Tower. But when did they hit the garden? The shape entered the garden in France, during the time of King Louis XIV, as his garden landscape master peppered the ground of Versailles with this visual element.

What is a Garden Tuteur?

The obelisk was named Tuteur in french, which means to train. Gardeners quickly figured out climbing plants loved to make their way up the perfectly shaped obelisks towards the sky and sun. Now, all types of tuteurs, metal, wood, stone and others, adorn gardens across the world, including mine, and possibly yours.

In this blog series, I will provide background, plans and how to make and place your obelisk in the garden. Subscribe for more