Written by admin on June 4, 2017. Posted in Flowers, Hydrangea, Planting

Ground Temp: Plant in fall
PH level: Varies depending on what color you want
Spacing: 3-10′ apart depending on species
Depth: As deep as root ball
Time to Bloom: Varies
Notes: Hydrangeas need plenty of water
… Read the rest

Written by admin on June 4, 2017. Posted in Facts, Flowers, Hydrangea 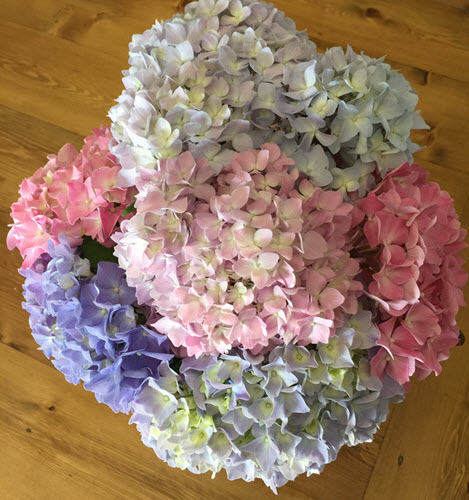 Changing Hydrangea Color: The Choice is Yours

How to change the color of your Hydrangea plant

There is nothing like walking into a Hydrangea garden and seeing a beautiful palette of blues, pinks and purples.  Here on the farm we use hydrangeas throughout the season for arrangements, centerpieces and to adorn our home.  Our main stock were the parent plants that were placed back in the 1950s when the house was built.  They were massive 8 ft high plants, that we propagated … Read the rest

Hydrangea is a genus of 70+ species of beautiful flowering plants native to southern and eastern Asia and the Americas. The greatest species diversity is in eastern Asia, notably China, Japan, and Korea. Most are shrubs 3 – 9 feet tall, but some are small trees. They can be either deciduous or evergreen, though the widely cultivated temperate species are all deciduous. Hydrangea flowers are produced from early spring to late autumn; they grow beautiful,… Read the rest